The hardest part is first getting settled. People already have their eye on me because I’m in a flower-covered, 15″ tall wig. My newest addition to your costume, a vintage veil from Goodwill, is aesthetically stunning but also makes my wig tilt back precariously. My biggest fear today is that I’ll tilt my head wrong and the wig will just come toppling off, and the illusion of some mystic statue fortune giver will melt into a frozen bald girl with a white face.

This doesn’t happen, though. Instead I get settled, full jar of fortunes at the ready, folding fan in the other hand. Then it’s the waiting game for who will be the first. This is my first time being a statue at the evening farmers market. I’m hoping people will come once the market is in full swing, but for now I’m just being watched by a couple old guys on a bench by the burrito truck.

My glazed-eye stare rests on the Local Burrito truck. Local Burrito has a Facebook and a Tumblr, I learn. Then a woman comes toward me, bends and drops a dollar in my basket. I  smoothly shift to life, bending and offering out my jar of fortunes. She takes one and smiles at me, and I am energized.

The market ends up being a great choice because of one big thing: KIDS! Toddlers and children are at the market with their parents, and point and gawp and sometimes, sometimes I come to life for them and I see their look of astonishment. Some come up to me with a parent-given dollar, afraid of me at first, but when they shyly came up and I bent, smiled and met their eyes, they were usually delighted. That was worth it all.

One young girl stopped with her mom to give a dollar, then they sat on the bench in front of me because the girl wanted to keep watching me. “You think she’s pretty?” The mom asked. “Yes, she does look like she is at a wedding with her veil. …No, my hair wasn’t that tall when I got married. It was a bun at the side of my neck.” And I listening as the mom had a conversation with her daughter.

Something about being a living statue is addicting. Maybe it’s moments like when the man stopped for a fortune, read it, then came back and gave me another dollar. “One for me and one for the horses,” he said. “This is really wonderful. You made my day.” I wonder which fortune he got.

Or maybe it’s just getting to overhear conversations, to stand still and watch people and soak up humanity like a sponge. 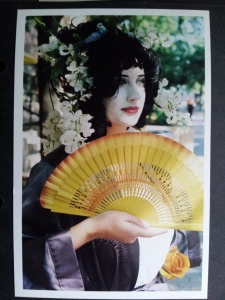 I couldn’t do this every day, and possibly not even every week, but it is a singular experience to look at yourself in a street window reflection and see a rather magnificent doll instead of a human being, to interact with humans as an Other, then to come home, pull off the beehive that Marge Simpson would envy, and grab a beer, talking easily with friends in white face paint and enjoying the luxury of being you, a human being.

For real this time. I struggle with the white makeup consistency, but I roll it around until my face is white, then on goes dark lipstick, darker eyeliner, five times more mascara than I wear on a night out. It doesn’t fully come together, though, until I pull on the 15″ high black beehive wig, which I have adorned with fake flowers and greenery and a bird. I literally put a bird on it. I look in the mirror and I’ve transformed into something other than me, something unusual and striking and what might strike some people at a glance as a statue.

The most awkward part of the entire morning is walking to my spot in the ped mall, but I just try to keep my teetering wig balanced and march down the street. I feel a bit better as passersby glance at me and then bust out in a grin. This is it, I think. I am doing this for real.

It’s a sunny Friday morning, breezy. School has started back up, so all the kids except for the tiny ones are gone from the brick-paved ped mall. However, I find myself in that frantic week of university students moving in to prepare for the start of the school year, so the place starts bustling. Once I’ve found a good spot, all I need to do is put down my donation box, get my jar of fortunes at the ready, and stand still.

Standing still is hard. I’m sure that surprises no one. Things were slow at first, and there were long periods of standing. When people put a few coins or a dollar in my donation box it not only meant that I was getting a nice little tip, but it also meant I got to stretch a bit as I bent at the waist, pulled back my folding fan, and held a jar of fortunes out so that they could take one. Then it was back to the pose, trying to remain still, still, still.

The thing about standing still is that it is the ultimate meditation. You are forced into the moment and into what you are doing because you have one unblinking view ahead of you, and your brain is focused on keeping tabs on every single muscle and making sure it doesn’t stray too far from its position.

The other thing about standing still is that you become this strange mixture of very noticed and very invisible. You can stare blatantly at someone, watching them intently, and they will walk right past as if you are an inanimate object. And until someone drops a coin and releases you from your spell, you are an inanimate object. As physically taxing as that may be, it does make for the ultimate in people-watching.

I noticed how so many people walked with their faces glued to their phones. I realized that I was guilty of that so often–texting back a friend as I tripped over sidewalk cracks and electrical cords, and for all I know I could’ve passed by something unusual, something beautiful that I completely missed. I vowed as I stood there to pay attention to my surroundings more as I walked, if only just to soak up the beauty in the mundane.

It was hardest to stay still at the reactions. The first person to drop money into my box was a friendly older lady. “You look beautiful,” she said. “Well done.” And in dropped a dollar. A dollar! Someone had given me a dollar just for standing, just for being.

“Oh my God, I love you!” An exuberant man came up to me, headphones around his neck. “Another street performance artist! Together we’re going to save this town! I love you! You’re awesome.” He tipped me, I bowed, gave him a fortune, and he called a friend. “Hey, man, you’ve got to come to the ped mall right now and see this street art! It’s awesome!” It was hard not to grin at that.

I made a concession for my rule that I would only move if money was dropped–when I saw little children I would bend, raise my fan, and wave it at them, then return to position.

Standing got more and more exhausting as the time went on. During long periods where nobody would stop, holding a position started to be unbearable. I could feel sweat trickle down the backs of my legs, and sometimes when a stronger breeze fluttered my robe, I could make tiny tiny movements to ease the tension a bit.

Every time someone stopped or commented or dropped a moment, though, I got an energy reboot. Every time I was about ready to say, “Eh, it’s probably about noonish. I could pack up,” someone would come along in a few minutes and would stop to take a picture, to smile, to grab a fortune out of my jar and read it. Maybe they’d read it out loud to a friend, or maybe they’d just slip it in their pocket and go about their day. Either way I felt this bubble of happiness and connection.

It was four hours before I finally packed up and started back home. The arm that had been holding the jar was so sore I could barely rotate it, and my shoulders and neck were stiff, but it was all worth it. As I walked home, I slowly started to shed my statueness. Wig tucked under my arm, robe billowing out behind me. My ghost-white face still got some stares, of course, but I was me again, and I felt like a better me, a kinder me who noticed more.

And, when I went home and counted through the cash, I found I’d made about $32! $32 for 4 hours…that’s better than minimum wage. And no taxes deducted.

It wasn’t the money, though. That kind of money wouldn’t make it worth the time, the effort, the sore muscles afterward that carried into the next morning. The whole experience was transformative. I was able to connect with strangers in a far more intimate way than I ever could just observing from a park bench. And I really saw people, and heard them. I felt engaged, alive, and energized, even through the tedium of not being able to move a muscle.